Steve and Jim, both school teachers of 20+ years experience (Jim with a MEd.) have been involved in Judo for a significant amount of time, training and competing under past Olympians at the University of NSW, University of Sydney, with visiting Japanese Masters and through the PCYC movement.

Both instructors have medalled at State level during their competitive fighting careers, and internationally in Judo Kata. Steve and Jim have coached at various dojo, including Jannali, UNSW, Sutherland PCYC, and now Southern Cross Judo Club - situated within SCJJA.

Steve and Jim have coached Judo at Southern Cross Jiu Jitsu Academy, in a fully Judo Federation of Australia affiliated setting since 2009. This arrangement grants Southern Cross members many benefits, including internationally recognised grades, eligibility to train at JFA sponsored events and training camps, and opens the path to the possibility of Olympic selection.

The brothers' love of fighting has also lead them to cross-train in Brazillian Jiu Jitsu at SCJJA in order to further develop their own newaza skills and better tailor Judo sessions to meet the needs of BJJ fighters. They incorporate both gi and no-gi grappling into their sessions in order to aid those fighters wishing to work on their stand up game, or compete in pure Judo contests. 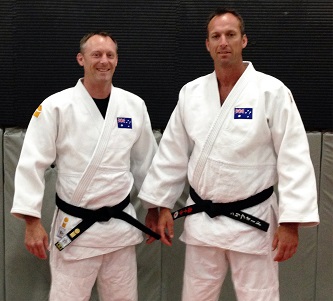